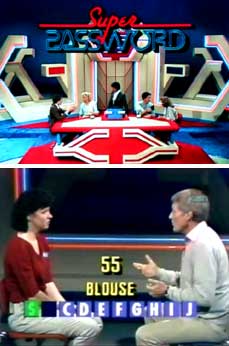 The original Password game show aired in 1961.  From 1979 to 1982, the show was called Password Plus, and then Super Password from 1984 to 1989.  Throughout the 80's, the show had a number of different hosts, such as Allen Ludden, Bill Cullen, Tom Kennedy, and Bert Convy.  Password Plus and Super Password both featured two contestants, paired with a celebrity, competing against each other for cash and prizes.

The object of the game was for the clue-giving partner to get their other team member to guess the password based on a one-word clue.  Teams would alternate giving one word clues until the password was guessed.  There were certain rules involved in giving the clue, such as no direct opposite words, no charades, etc.  The contestant that won the early rounds would go onto a bonus round, and could return to subsequent shows.