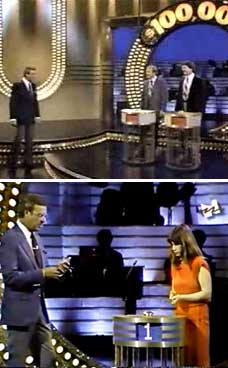 Name That Tune was a very long running gameshow that first made NBC radio in 1952.  It had a few different runs in the 1980's, with Tom Kennedy hosting until 1981 and Jim Lange from 1984 to 1985.  The show featured two contestants who battled each other by testing their knowledge of famous songs.

In the 70's and 80's version of the game, two people were chosen from the audience to compete for cash and prizes (some big prizes were available, such as $100k).  There were three rounds, and whichever contestant had the most points at the end of the third round would go on to play Golden Medley.  There was a variety of games that were played, such as Bid-a-Note and Build-a-Tune.  Bid-a-Note had contestants bidding for the number of notes they needed to guess a song name, and Build-a-Tune featured the orchestra slowing adding instruments to a song until the contestants guessed it.