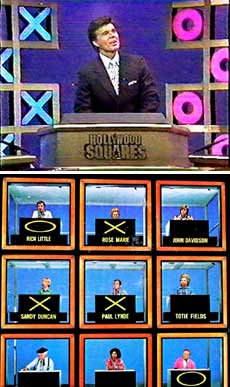 Hollywood Squares was a long-running game show that originally aired in 1966.  It is considered by many to be one of the greatest gameshows of all time.  It ran throughout the 1970's and most of the 1980's.  Hosts of the show in the 80's included Peter Marshall, John Bauman, and John Davidson.

In this game, two contestants play tic-tac-toe for cash and prizes.  The tic-tac-toe board was a 3 X 3 stack of small cubicles, each occupied by a celebrity.  The player would choose a celebrity, the host would ask them a question, and the contestant would judge the truth of the celebrities answer in order to claim the square.  The success of the show was largely attributed to the comedic answers given by celebrities.  Must like in normal tic-tac-toe, getting three X's or O's in a row would win the match.  There were different iterations of the show over the years that featured different prize packages, but they all adhered to the same general, tic-tac-toe format.