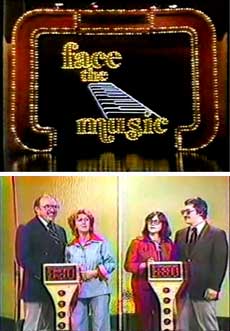 Face the Music only ran for two seasons from 1980 to 1981, but some of you may remember it.  The show was hosted by Ron Ely and was essentially a derivative of Name That Tune.  Each episode featured three new contestants and one returning champion playing for cash and other prizes.  Returning champs received a new car after winning 5 shows and a trip around the world after 10 wins.  By the time show was canceled, champions could keep on coming back as long as they were winning.

In round 1 of this game, contestants would be shown a series of pictures, like pictures of famous people or places, and then the band would play a song.  Contestants would buzz in and not only identify the song, but also the picture the song was associated with.  For example, the theme song to Happy Days would be associated with a picture of Garry Marshall (the producer of the show).  In round 2, a subject category was given to the contestants, and a number of songs related to that category would then be played.  The contestant would have to buzz in and guess what specific area of the category the songs related to.  Other rounds, including the championship round where the returning champ battled the next best contestant, had a similar premise.