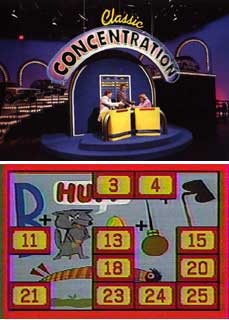 Classic Concentration was the next generation of the game show Concentration from the 1950's through the 1970's.  The original show ended in 1978 and the new version, Classic Concentration, hit airwaves in 1987 and ran until 1991.  The show was hosted by Alex Trebek, who was also busy with Jeopardy at the time.  Contestants could win 1 of 8 new cars (and other smaller prizes along the way).

In this game show, players started with a tv screen board that had 25 numbered blocks.  Most blocks represented a prize (some were wild cards).  Behind the blocks was an image, word puzzle that they had to solve.  The contestants would have to make matches to win prizes and expose parts of the puzzle.  For example, the letter H + a picture of an eyeball, and the letter J + the picture of a camel's hump was solved as "high jump."  As each pair was selected, the blocks would fall away, exposing part of the puzzle underneath.  There were also "take" blocks, that once matched, would allow the contestant to take one of their opponent's prize.  The winner of the round received all their prizes, and after winning 2 rounds, they moved to the bonus round.  In the bonus round, the player was given 15 squares of car names and 45 seconds to make all the matches.  If they made all the matches, they won the car.