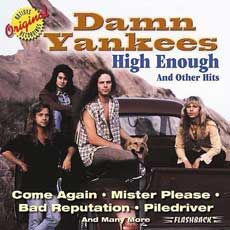 The Damn Yankees was a super group that hit the scene around 1990 and did fairly well even though they had a late start.  With band members Ted Nugent (self proclaimed), Tommy Shaw (Styx), and Jack Blades (Night Ranger), the Damn Yankees knew their way around back stage.

The Damn Yankees was actually formed in 1989.  Their debut self-titled release went double platinum, and included the songs "Coming of Age" (Jake Blades on vocals), "Come Again" (Tommy Shaw on vocals), and "High Enough".  The band toured with groups like Bad Company, Poison, and Jackyl.  Some of you may remember the song "Don't Tread" from their 1992 release (this album went Gold).  You may also remember that the Damn Yankee's tunes made it on some post 80's movie soundtracks like Gremlins 2 and Van Damme's Nowhere to Run.

At the time of this writing, the Damn Yankees Discography was as follows: