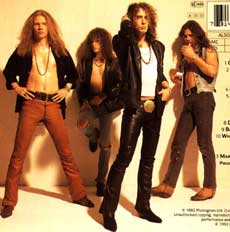 Electric Boys was a gem of a funk metal band that formed in Sweden in 1988.  In 1988, the band landed a recorded deal with Polygram Records after they found success with an awesome Swedish single titled “All Lips and Hips”.  This was the band’s most popular song and it was featured on their 1989 debut album Funk-O-Metal Carpet Ride.  Some of you may also remember the song “Psychedelic Eyes” from this album.

Electric Boys was not able to release their sophomore album until 1992 (Groovus Maximus), and they went on tour with Mr. Big in support of that album.  After the band’s 1994 release, they took a long hiatus.  In 2009, the band came back together for another go, and they released two new albums.  The band was still active at the time of this writing in 2016.  Electric Boys was an underrated band and even their newest releases are worth owning.

The Electric Boys Discography is as follows: