Listen for free or download any Queen track for just 12 cents per song! 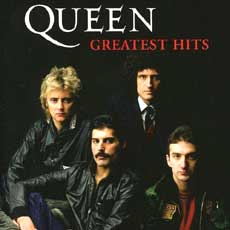 By far one of the greatest English rock bands of all time, the eclectic Queen started out in 1968 as a band called Smile (London area).  Farrokh Bulsara (aka Freddie Mercury), joined the band in 1970, and encouraged the band to change their to Queen.  Initially, Queen's demo recordings were rejected by record execs, but by 1973, the band released their self-titled debut album.  Although the album was not a huge success, it did receive good press.  You might remember the song "Keep Yourself Alive" from this release.

It was the band's 1974 release, Queen II, that featured the famous Bohemian Rhapsody image of the band that has often been parodied.  The biggest hit song from this release was the song "Seven Seas of Rhye", and the album charted at number 5 on the UK charts.  Sheer Heart Attack, also released in 1974, charted at number 2 on the UK charts and went Gold in the USA (this was their first album to bring them critical acclaim from the USA).  This album featured the hit songs "Killer Queen", "Now I'm Here", as well as "Stone Cold Crazy", which was re-made by Metallica years later (the song was a precursor to speed metal and was not changed much by Metallica).

In 1975, Queen released the album A Night at the Opera.  It was this album that featured the songs "Love of My Live", "You're My Best Friend", and of course "Bohemian Rhapsody" (this song, at the time of this writing, was the third best selling UK single of all time and considered by many to be the greatest song of all time).  Their 1976 release, A Day at the Races, featured the hit songs "Tie Your Mother Down" and "Somebody to Love".  Queen was at the top of their game, filling stadiums with as many as 150 thousand fans.  In 1977, Queen released News of the World, which featured the hit songs "We Will Rock You" and "We Are the Champions".  The band's 1978 release, Jazz, featured the hit songs "Bicycle Race", "Don't Stop Me Now", and "Fat Bottomed Girls".  The hit songs "Crazy Little Thing Called Love" (the band's first number 1 hit in the USA) and "Another One Bites the Dust" were released in 1980 on the album The Game.  It was Michael Jackson who suggested to Queen that they release "Another One Bites the Dust" as a single, and it stayed at number 1 in the USA for three weeks.

In 1980, Queen also released the soundtrack for the movie Flash Gordon.  The song "Under Pressure", which featured David Bowie, was released on Queen's 1982 release, Hot Space.  Other songs you may remember include "One Vision" from the 1985 album by the same name, "A Kind of Magic", "Friends Will Be Friends", "Princes of the Universe (originally from the Highlander soundtrack), and "Who Wants to Live Forever" from their 1986 release, A Kind of Magic.  The song "I Want It All" was released in 1989 (The Miracle) and "The Show Must Go On" and "Innuendo" were song released on Innuendo.

It was by the late 1980's that fans began to recognize Freddie Mercury's illness (AIDS).  He died in 1991.  Queen's final album featuring Mercury was the album Made In Heaven, which was released in 1995 and featured recordings from 1991.  The songs "Too Much Love Will Kill You" and "Heaven for Everyone" were from this release.  As the years have gone by, Queen has continued to perform sans Mercury.  At the time of this writing, the Queen Discography was as follows:

Listen for free or download any Queen track for just 12 cents per song!