Listen for free or download any Quarterflash track for just 12 cents per song! 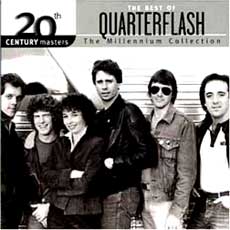 Quarterflash formed in Portland, Oregon, circa 1980, when two local bands, Seafood Mama and Pilot, merged together, initially keeping the name Seafood Mama.  Seafood Mama was a successful band in the Portland area, even landing their own TV special in 1980 where they featured the song "Harden My Heart", a song later released under the Quarterflash moniker.  Eventually they switched their name to Quarterflash, which is an allusion to an Australian saying that describes new immigrants as "one quarter flash and three parts foolish".

After signing with Geffen Records, Quarterflash debuted in 1981 with a self-titled album.  The album featured the aforementioned song "Harden My Heart", which was a  huge hit in the US and a minor hit in the UK.  Some of you may also remember the top 40 hit "Find Another Fool" from this release.  In 1983, they released the album Take Another Picture, which featured the hit song "Take Me to Heart".  Their last 80's release, Back into Blue, only met with minor chart success.

Quarterflash split up in the early 1990's after releasing the album Girl in the Wind on a new label.  The two consistent members throughout the history of Quarterflash were vocalist Mindy Ross and her guitarist husband Marv.  In 2008, the two released a new album as Quarterflash.  More to come?  The Quarterflash Discography is as follows:

Listen for free or download any Quarterflash track for just 12 cents per song!