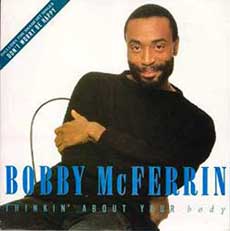 Robert "Bobby" McFerrin, Jr. may look like a Rastafarian, but he was actually born in New York City.  McFerrin had a music career well before the some he is most remembered for, and as both a vocalist and a conductor, he was won ten Grammy Awards.  McFerrin has an interesting vocal technique.  Not only does he tap on he tap on his chest and use his mouth as a beat box, but he also has been known to use an overtone singing technique as well as falsetto.

Bobby McFerrin's self-titled album was released in 1982, although he had collaborated with other musicians on their albums prior to this release.  In the mid 1980's, McFerrin was could also be found doing voice-overs for cartoon characters, and some of you may remember that he performed the opening credit for season 4 of The Cosby Show.  McFerrin continued producing throughout the 80's (The Voice in 1984, Spontaneous Inventions in 1985).  In 1988, McFerrin released the album Don't Worry Be Happy.  The title track for this album is the song that McFerrin is most remembered for.  "Don't Worry Be Happy" was the first a cappella song to reach number 1 on the Billboard Hot 100.  After George Bush used the song during his 1988 Presidential run without permission, McFerrin quit performing the song in protest.

After the success of "Don't Worry Be Happy", McFerrin decided to branch out to even more eclectic pursuits.  He could be found composing and performing the scores for the silver screen and television, as well as conducting renown orchestras.  And of course he continued in studio.  At the time of this writing, the Bobby McFerrin Discography was as follows: