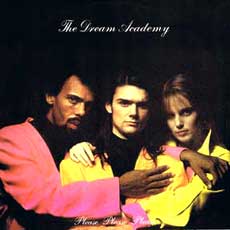 The English band Dream Academy (or The Dream Academy) was made up of the trio Nick Laird-Clowes (vocalist), Gilbert Gabriel, and Kate St. John.  Nick and Gilbert had played before in the late 1970's in a band called The Act, and they decide to join a new band that featured a hodge-podge of instruments that would set them apart from other pop acts of the day.  The initial band name they gave themselves was The Politics of Pop.  After adding St. John to the group, Dream Academy was officially formed.

The band tried for two years to get a record deal.  Finally, in 1985, Warner Brothers signed The Dream Academy.  Their first self-titled debut (1985) was not only co-produced by David Gilmour of Pink Floyd, but also featured Gilmour as musician on some tracks.  It was this release that featured the hit song "Life In a Northern Town".  This song charted at no. 7 in the USA, and 15 in the UK.  Initially it was to be called "Morning Lasted All Day", but it is said they changed the name of the song based on a recommendation by Paul Simon.  Interestingly, Warner Brothers did not want this song released as a single, but it turned out to be their only major chart success.