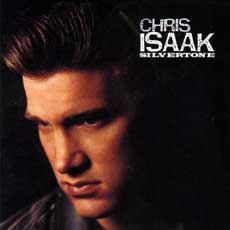 American born Chris Isaak was born and raised in Stockton, California.  Borrowing his brother's guitar as a teenager, Isaak taught himself how to play.  During college, Isaak spent a great deal of time as an amateur boxer.  It was during a semester as a college exchange student in Japan that he began contemplating a career in music.

Chris Isaak initially started out as a solo act, but soon formed a rockabilly band called Silvertone.  After many nights on the Bay Area club circuit, Isaak finally caught the ear of a record exec, and he landed a record deal with Warner Brothers in 1984.  His first release Silvertone, was released in 1985.  The album met with some success, and Chris Isaak began to earn a reputation as putting on a great show.  His second release, a self-titled album that hit shelves in 1986, was an even greater success.  You may remember the song "You Owe Me Some Kind of Love" from this album.

In the late 1980's, Isaak began branching out to the Silver Screen, starring in movies like Married to the Mob.  In addition, Isaak released his most successful album to date in 1989:  Heart Shaped World in 1989.  This was the album that featured the hit songs "Wicked Game" and "Don't Make Me Dream About You", which was featured in a movie called Wild at Heart.

As the years rolled on, Isaak continued producing hit songs and starring on the silver screen, even landing his own show in the early 2000's on Showtime called The Chris Isaak Show.  At the time of this writing in 2013, Chris was still active on stage and in studio.  The current Chris Isaak Discography is as follows: