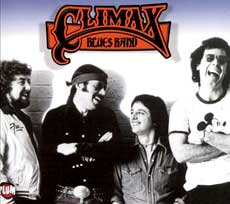 Climax Blues Band, which formed in England circa 1968, was originally called the Climax Chicago Blues Band.  They took the name "Chicago" out in 1970 to set themselves apart from the American band Chicago Transit Authority (aka Chicago).  The Climax Blues Band debuted in 1969 with a self-titled release, and continued releasing until finally finding their first commercial success in 1975 with Stamp Album.  Their 1976 release, Gold Plated, was even more successful, and featured the hit song "Couldn't Get It Right".  By the mid 70's, The Climax Blues Band was a big enough to bring in crowds of 20,000 screaming fans in the USA.

By the early 1980's, in an attempt to maintain their popularity, The Climax Blues Band left their blues roots behind and transformed themselves into a more pop rock band.  They did meet with some success, as many of you will remember the hit song "I Love You" from their 1980 album Lucky for Some.  The song continues getting significant radio air play 30+ years later.  Not long after the release of this album, the band began having some struggles and some members went onto solo efforts.

Although the Climax Blues Band was never able to recapture their former glory, they did continue producing and touring.  Their last studio album was Big Blues in 2004.  In 2008, vocalist Colin Cooper passed away.  It is not clear whether or not the band has plans to continue on.  At the time of this writing, the Climax Blues Band Discography was as follows: