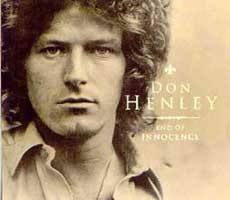 After the 1982 break-up of The Eagles, like other Eagle's members, Donald Hugh "Don" Henley went solo.  Considering that Don Henley was the vocalist for the Eagles, it is not surprising that his solo career was a success.  Henley grew up in Texas, but moved to L.A. in 1970 to record an album with his then band Shiloh.  It was around this time that Henley met Glenn Frey, and they both worked as backup band members for Linda Ronstadt.  Soon after, The Eagles were formed (1971).

The Eagles had a  great career until they decided to break up in 1980.  Henley's first solo release, I Can't Stand Still (1982), met with moderate success.  It was this album that featured the hit song "Dirty Laundry", which charted at no.3.  Building the Perfect Beast was released in 1984 and featured the hit song "The Boys of Summer", the music video of which won several awards.  This song also netted Henley a Grammy award.  Other hit songs from this album include "All She Wants to Do is Dance", "Not Enough Love in the World", and "Sunset Grill".  Some of you may also remember the hit song "Who Owns This Place" from The Color of Money Soundtrack. Henley released The End of Innocence in 1989, which featured the hit songs "The End of Innocence", "The Heart of the Matter", "The Last Worthless Evening", and "New York Minute".

Henley would not release under solo album until 2000 (Inside Job).  During this time, however, The Eagles were back in studio and on stage, so Henley stayed very busy.  At the time of this writing, the Don Henley Discography was as follows: