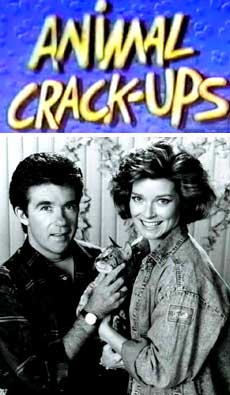 Animal Crack Ups was an ABC charity game show that aired for 3 seasons from 1987 to 1989, and again in 1990.  Animal Crack Ups was a rather unusual game show in that it was more like a zoological science program than a game show.  The show was hosted by Alan Thicke, who, at the time, was still busy with the Growing Pains TV show.  The show was based on a Japanese show called Waku Waku and featured four celebrities competing against each other with the $2500 purse going to the charity of their choice.

In the show, Alan Thicke would show an animal clip of some type, pause the animal clip, and then ask the celebrities questions about the clip.  If they got the question correct, they would get a stuffed animal to demonstrate they got the correct answer.  The celebrity with the most correct answers at the end of the show would win and their charity would be announced.  The show was rather lighthearted and meant to be fun and educational.