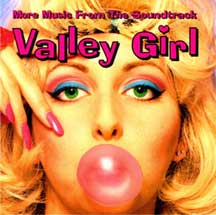 Valley Girl originally was the name given to the upper-middle class girls living in the San Fernando Valley area (in the early 1980's).  The height of the period was from 1982 to 1983, when there were a number of movies aimed at the movement.  The most popular was a 1983 film, titled Valley Girl, that starred Nicolas Cage.  Like the term "yuppy", the phrase "valley girl" was meant to describe a group of people in terms of not only their socio-economic status, but also their slang and materialistic attitudes.  The Valley Girls epitomized spoiled girls who care more about shopping than improving themselves.  Their clothing style and "valleyspeak" language spread across the USA and Canada.  Valleyspeak was known for its word qualifiers that made their way into the middle of a sentence for emphasis ("like", "whatever", "as if", "totally", etc.).

VALLEY GIRL 1: "Hey, Angie, like, did you hear, Johnny has totally got the hots for Amy."