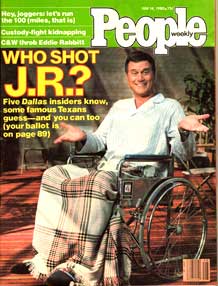 "Who shot J.R." was a phrase used after the 1979-1980 season of the TV drama Dallas to pull viewers into the third season.  Dallas was a highly popular prime time drama on CBS that ran from 1978 to 1991. The phrase actually took on a life of its own and began showing up on things like bumper stickers and t-shirts.  Professional betting establishments even took bets on who the perpetrator was and the Royal family even took an interest.  J.R. Ewing became one of the biggest stars of the time.  He even had his own line of character-specific merchandising.  Initially, the role of J.R. Ewing, played by Larry Hagman, was a secondary character, but by the end of season 2, it was one of the main roles.  In that final season episode, titled "A House Divided, J.R. hears a noise outside of his office, which he goes to investigate.  He is shot twice by somebody in the shadows and then the episode ended.  The shooter would not be revealed until the episode "Who Done It?", aired in November of 1980.  The shooter?  J.R.'s sister-in-law and lover, Kristin Shepard, who was pregnant with his child.