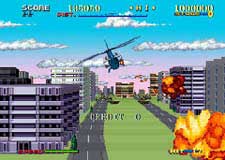 Thunder Blade was a helicopter rail shooter released by Sega in 1987.  The game was very similar to the 1983 film, called Blue Thunder, which also became a short-lived TV series in 1984.  In this game, the player controlled a helicopter on a warpath to destroy tanks, helicopters, airplanes, and bosses, while flying through canyons and industrial areas.  The view of the game switched from third person to top down depending on the level (boss levels were always top down).  Unique to the game, in the standup cabinet version, was the haptic feedback (force feedback) of the joystick during gameplay, which would vibrate at various points in the game.  In the sit down version of the game, the entire seat would move in tandem with the joystick movement.