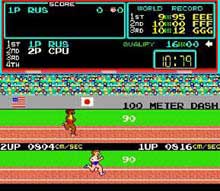 Track and Field was released by Konami in 1983.  It was a popular game as it was relatively simple to understand.  The player’s had to essentially push alternating buttons as fast as possible to win an event, and then a third button if the event required it (for jumping or throwing, for example).  The abuse the buttons took at the arcade was significant enough to warrant a re-release of the hardware that included a trackball instead.  There were six events:  100 meter dash, long jump, javelin throw, 100 meter hurdles, hammer throw, and the high jump.  Players had to complete an event within a specific time limit to advance to the next event.

Track and Field was successful enough to encourage Konami to continue producing similar games to arcades, such as Hyper Sports (1984) and Konami ’88 (1988).  Many of you will remember playing Track & Field on your NES, and in later years the game was released on the Konami Classic Series for Nintendo DS and could be found on Xbox Live Arcade.