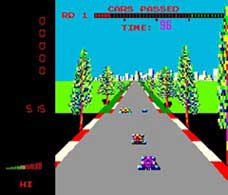 Turbo was a Sega cross country racing game released in 1981.  There was a sit down version and a stand up version.  In this early racing game, the player raced a car, from a third-person top down perspective, through a number of different terrains.  You would drive up hills, through tunnels, in different types of weather, and even late at night or early in the morning.  There was even a point where an ambulance would speed up behind you.  The player would earn points by passing cars and staying on the road, and if at least 30 cars were passed before time ran out, the player would advance to the next level.  There was no end to the game.  Once the player ran out of time, or crashed, or failed to pass at least 30 cars, the game was over.

Turbo was a very popular game, and could be found in just about every arcade around in the early 1980’s.  Versions were developed for the home market, for systems like ColecoVision and Intellivison.  Some of you may even remember that Milton Bradley created a board game in 1983 based on the game.