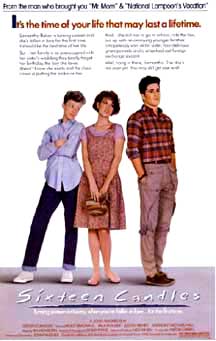 "Turning sixteen isn't easy when you've fallen in love...for the first time".  Starring Molly Ringwald as Samantha Baker, Justin Henry as Mike Baker, Michael Schoeffling as Jake Ryan, John Cusack as Bryce, Gedde Watanabe as Long Duk Dong, and Anthony Michael Hall as “Farmer Ted”, Sixteen Candles (1984) was another classic John Hughes film.  The film was a hit with critics, many of whom considered the movie to be one of the best films of 1984.  It was a major financial success and the jumping off role for 80’s actors/actresses like Anthony Michael Hall and Molly Ringwald.

In this movie, high school sophomore Samantha “Sam” Baker (Ringwald) is trying to make it through her birthday, which her parents have forgotten about because her sister was getting married the following day.  To make matters worse, as sex quiz she filled out detailing her wishes with an unrequited love interest, Jake Ryan (Schoeffling), ends up in Jake’s hands.  In addition, there are two other issues she has to deal with:  Firstly, her visiting grandparents have brought along a foreign exchange student named Long Duk Done (Watanabe), who Sam is required to take to the senior dance that night.  Secondly, the school geek, often referred to as “Farmer Ted” (Hall), has a bet with his friends that he will be the one to deflower Sam.  In the end, Farmer Ted ends up with Jake’s girlfriend, and Jake finally gets in touch with Sam.  They share a kiss at Sam’s sister wedding over the birthday cake that Jake brought.