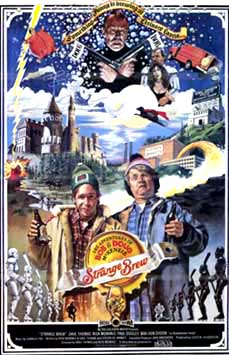 In this movie, the unemployed McKenzie brothers try to trick a local beer steer into giving them free beer by placing a live mouse in a beer bottle and showing it to the store.  When the store tells the brothers to take the matter up with the brewery, the two end up with jobs on the bottling line, inspecting bottles for live mice.  At the same time the brothers are working away, the brewmeister hatches a plan to take over the world by drugging the beer with a substance that allows him to take over the mind's over partakers.  He tests his beer on residents of the an insane asylum, which is where the judge sentences the McKenzie brothers after they are framed by the brewmeister.  With the help of a fortune telling video game, and the owner's daughter, the brothers foil the plot and save the world.