Home » silver-screen » Comedies » Secret of My Success, The

Secret of My Success, The 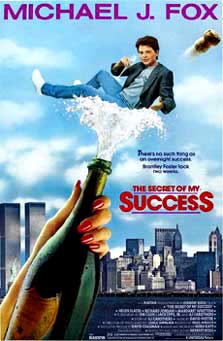 "There's no such thing as an overnight business.  Brantley Foster took two weeks".  The Secret of My Success was a 1987 comedy that starred Michael J. Fox as Brantley Foster and Helen Slater as Christy Wills.  The movie received mix reviews from critics at the time, but still was a huge box office draw, and was ultimately the 7th highest grossing film of 1987.

In this movie, Brantley, a Kansas farm boy and recent KSU graduate, has corporate ambitions in NYC.  Just prior to beginning his new job, he finds out the company was supposed to start working for has been bought out, and his job is no longer available.  After being unable to land a similar job, he takes a position with his uncle’s firm (his uncle is the CEO at the Pemrose Corporation).  Not satisfied with the mail room position given him by his uncle, and realizing that the business execs were making poor decisions, Brantley grabs an empty office and masquerades as a young exec named Carlton Whitfield, wooing the corporate ladies and bedding the boss's wife (by accident).

In the end, the plot is a fine Three’s Company style love triangle mix up where nobody knows Brantley’s real identity, and everyone suspects everyone else of wrong doing.  Eventually, it is Brantley and his uncle’s wife who raise enough cash to conduct a hostile takeover of the Pemrose Corporation, in addition to another rival called the Davenport Corporation, and Brantley’s aunt eventually puts Brantley in charge of the whole shebang, while his uncle ends up in the dog house.