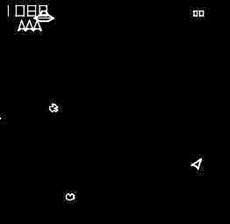 Asteroids was an Atari game released in late 1979 and is one of the top games to come out of what some refer to as “the golden age of arcade games” (from the late 1970’s to mid 1980’s). Being an early game, and set in space no less, like Lunar Lander and Space Wars, game play was rather simple. The user controlled a little arrow-head shaped space ship that had to blow up all the asteroids on the screen to level up. When you blasted an asteroid, it would splinter in multiple pieces, all of which would also need to be destroyed. As the levels progressed, the number of asteroids would increase. If the ship came into contact with an asteroid, or was shot by the occasional pacing flying saucer, then it was destroyed.

There were follow up games, including Asteroids Deluxe (1981) and a Blasteroids in 1987, and of course home console clones like Intellivision’s Astrosmash.  Those of us who spent a lot of time in front of our home consoles, like the Atari 2600, appreciated the generic nature of this game, as it allowed the developers to create something that sort of reminded us of the coin-operated arcade version.