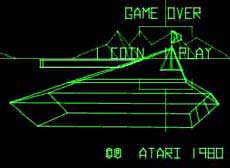 Battlezone was a 1980 arcade game that used vector graphics to display images in a wireframe way, like Asteroids, Lunar Lander, and a handful of other classics. Because of its use of the periscope viewfinder and the fact that is was from a first person perspective, some consider Battlezone to be the first virtual reality game produced. Although some may argue this, it is worth noting that a military version of the game was produced for the Army to help train Bradley Fighting Vehicle gunners.

Fans of the game will remember that the user pilots a tank through rock terrain, using a small radar to locate enemy tank. From time to time, UFOs would pop up randomly, and these could not be seen on the radar. You could use the terrain (rocks, boulders) to maneuver the tank to both avoid enemy fire and to get the jump on enemies. The player viewed the game through a periscope and used two joysticks to move the tank. There were tons of spin-offs of Battlezone,in addition to authorized versions for the PC, Commodore 64, Apple II, Atari 2600, and many more. As the years have gone on, and home systems and PCs have become more sophisticated, so have the spin-offs and remakes of Battlezone.