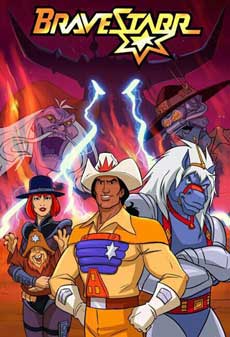 Bravestarr was an animated space western cartoon that ran from 1987 to 1988.  At the same time that the show was in syndication, a Bravestarr action figure toy line was also peddled to fans.  Many fans of the cartoon will remember that a full featured film, titled BraveStarr: The Movie in the USA and BraveStarr: The Legend in the UK, was also released in 1988.

Fans of this show remember that Marshall BraveStarr was the only lawman on the planet "New Texas" with the help of a walking horse named Thirty-Thirty.  BraveStarr was a Native American that had the ability to summon sprit animals, like a hawk, wolf, bear, and puma.  The planet's major resource, Kerium, is a powerful fuel used to power ships, and the target of outlaws.  Characters of the show included the indigenous Prairie People, prospectors such as Angus McBride and Billy-Bob, Villains like Barker and Krang, and of course creatures like Apecats and Dingos.  Each episode ended with a moral story.