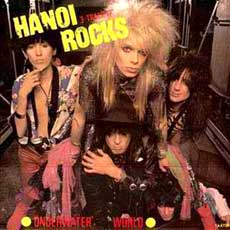 Hanoi Rocks was a punk-metal band from Finland that originally formed in 1980.  The early days of Hanoi Rocks found them producing albums and touring extensively in Finland.  After making a name for themselves back home, the band moved to London in 1981 to work on their second album (Oriental Beat).

By 1983, Hanoi Rocks had made a name for themselves not only in the UK, but also in Japan and were starting to get noticed in the USA.  Hanoi Rocks was a huge hit in Japan, a fact that Finnish homelanders couldn't quite grasp.  Japanese fans would break into hotels to get a glimpse of the band and even pay phones played Hanoi Rocks tunes.

By 1985, the band had split up after the death of their drummer, Razzle.  After coming stateside in 1984 and partying with Motley Crue, Razzle died in a car wreck.  The story goes that the party was running out of beer, so Vince Neil and Razzle decided to hit the road in Vince's Pantera for a run.  The only problem was that both Vince, who was driving, and Razzle, were intoxicated.  Vince crashed the car and Razzle was killed.

By 2001, the band had reunited and released a new album in 2002, 12 Shots on the Rocks.  By 2008, the band had called it quits again.  Although Hanoi Rocks never made it as big as many bands, they have a huge cult following and have had influence on some well know bands like Skid Row, Alice in Chains, and Guns N' Roses ( G N' R released some of their early stuff on the Geffen label).  It is widely recognized that Hanoi Rocks was the father of the Glam Metal movement.

At the time of this writing, the Hanoi Rocks Discography was as follows:

Hanoi Rocks Nobody Does Decadaence Like They Did It 1989 Promo Poster Ad
$9.99