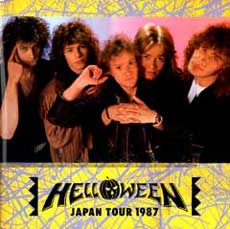 Helloween was from Hamburg, Germany and formed way back in 1984.  Helloween is described as a "Power Metal" band, which essentially is a genre of metal that mixes speed metal, traditional metal, Lord of the Rings, and often features vocalists that sing like somebody is squeezing their balls.

Helloween originally signed with Noise records in 1984 for a two song release on a compilation album called Death Metal.  Helloween's original vocalist and guitarist, Kai Hansen, switched to just being the guitarist, and in 1986, the band hired a young Michael Kiske on vocals.  Most of us are familiar with Kiske's vocals as he was the singer on Keeper of the Seven Keys: Part 1 (1987) and Part 2 (1988).  Many of you will remember the song "I Want Out" which received heavy rotation on MTV's Headbanger's Ball.

By the early 1990's, Helloween's releases took on a new fangled direction that were a clear departure from the mythological themes that made up the Power Metal genre.  In 1991, Helloween released the album Pink Bubbles Go Ape, a much less heavy album with comedic over tones (the album included songs like "Heavy Metal Hamsters" and "Sh*t and Lobster").  The band's 1993 release, Chameleon, was an even stronger divergence from Power Metal than their 1991 release.  In fact, this album is often described as a hodge podge of horns, keyboards, grunge, country swing, etc.  Needless to say,  both albums failed commercially.  By 1993, tensions were high, and members began leaving the band, including Kiske.

By 1994, with a new vocalist, Helloween returned to their roots with the release of the well received album, Master of the Rings. By the mid 1990's, Helloween had once again established themselves as a premier European metal band.  At the time of this writing, the Helloween Discography was as follows:

HELLOWEEN KEEPER OF THE SEVEN KEYS SUBLIMATED BACK PATCH
$12.98