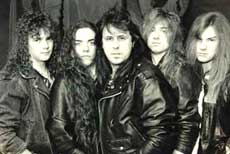 Heaven was an Australian metal band that formed in 1980 as a band called Fat Lip.  As Fat Lip, the band made a name for themselves in Australia, and they caught the attention of a new label called DeLuxe.  DeLuxe signed the band to a record deal, and Heaven released their first album in 1982 (Twilight of Mischief).  RCA distributed the album in the USA.  Fans of Heaven will recognize that in their early days, they sounded a lot like AC/DC .  The band went on tour in the USA with Motley Crue and Dio in the USA to support the album.  In 1983, their second release, Where Angels Fear to Tread, was released.  The most recognized song from this second album was “Rock School”.  The band broke up shortly thereafter.

In 1984, vocalist Allan Fryer moved the band to the USA where they recorded and released the album Knockin’ on Heaven’s Door (some of you may remember the title track cover from this release).  The band toured with Judas Priest, Kiss, Iron Maiden, and Motley Crue in support of the album.  By the late 1980’s, Heaven’s activities were greatly curtailed.  The band did reform in the early 2000’s for a couple of shows.  In 2015, Allan Fryer died of lung cancer.  The Heaven Discography is as follows: