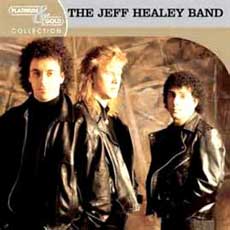 Norman Jeffrey Healey was a blues/jazz rocker from Canada.  At one year of age, Jeff Healey was blinded by a rare form of cancer.  At three years of age he began playing the guitar, essentially teaching himself to play with the guitar flat on his lap.  Healey's first band, at 17, was called Blue Direction, and was known as a local Toronto bar band.

Before long, Healey teamed up with bassist Joe Rockman (seriously?) and drummer Tom Stephen, and the Jeff Healey Band was formed.  After becoming a huge club draw in the Chicago area, the band was soon discovered by veteran guitarists Stevie Ray Vaughn and Albert Collins.  In short order they had a contract with Arista Records, and in 1988, See the Light was released.  Songs you may remember from this album include "Angel Eyes" and "Hideaway".  Around this same time, the band was recorded and starring (cameo) in Patrick Swayze's Roadhouse.  The band continued releasing throughout the 1990's, and the albums Hell to Pay (1990) and Feel This (1992) ultimately landed the band several charting singles in Canada.