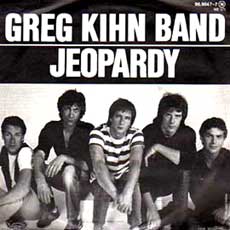 Greg Kihn started his music career in Baltimore.  After his mother submitted one of his demos to a radio station, he won a typewriter, an electric guitar, and a stack of albums, and the rest is history.  By 1972, Kihn had moved to San Francisco and started working his way into the music scene.  The Greg Kihn Band released their first album in 1976.

The Greg Kihn Band kept rolling out the albums, and building a strong following.  The band's first chart success came with the release of Rockihnroll in 1981.  Many of you will remember the hit song "The Breakup Song (They Don't Write 'Em)" from this album.  Their next big hit came with the song "Jeopardy" released on Kihnspiracy (1983).  The Greg Kihn band toured heavily in the early 80's, opening for bands like Journey, the Rolling Stones, and the Grateful Dead.  Another song that did well was "Lucky", from Citizen Kihn (1985).  By the mid 80's, Joe Satriani had even joined the band on guitar for a short time, before starting his solo career in 1987.

As the years have rolled on, the Greg Kihn Band continued producing new material and touring, often with a different line up.  Although they never were able to re-capture their 80's popularity, they continued to be a popular live draw.  The Greg Kihn Band Discography is as follows (note the play on words using his last name on many of the albums):