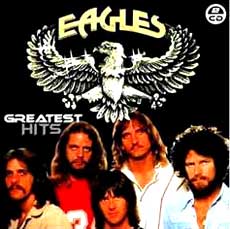 The Eagles started back in 1971 in Los Angeles and ultimately became the most successful rock band of the 1970's.  For this reason, we include them here at ilovethe80s.com, event though technically all members were well into solo projects throughout the 1980's.  The members of the Eagles originally came together as session musicians for Linda Ronstadt.  After only one show, and with Ronstadt's blessing, Glenn Frey, Don Henley, Randy Meisner and Bernie Leadon started the band "Eagles".  The bands first self-titled release was released in 1972 and, with the help of Jackson Browne, was a great success.  There were ultimately three hit songs that came from this album:  "Take It Easy", "Witchy Woman", and "Peaceful Easy Feeling".  Southern California County Rock had taken firm root in the world of rock music.

Featuring an "old west" theme, the Eagle's second release, Desperado, was released in 1973 and featured the hit songs "Tequila Sunrise", "Outlaw Man", and the title song "Desperado".  By the band's 1974 release, On the Border, their sound had began moving more towards hard rock than country rock.  They added Don Felder as another member of the band, and two more hit songs were the product:  "Best of My Love" and "Already Gone".  It was on tour for the Eagle's 1975 release, One of These Nights, that guitarist Bernie Leadon left the band and was replaced with Joe Walsh.  This album became the first in a run of number one releases and featured the hit songs "One of these Nights", "After the Thrill is Gone", "Lyin' Eyes", and "Take it to the Limit".

In 1976, the Eagle's released a greatest hits album that became the highest selling album in U.S. history.  The same year, the band released Hotel California, which not only featured the title track as a hit, but also the songs "New Kid In Town" and "Life in the Fast Lane".  According to Don Henley, the lyrics for "Hotel California" was nothing more than a commentary about excess in America and the tough side of the American Dream.  The last album released prior to the Eagle's initial breakup was The Long Run, released in 1979 and featuring the hit songs "Heartache Tonight", "In the City", and the title track.  The song "Seven Bridges Road" was featured on the band's 1980 live album release (see discography).

By 1980, it was over.  The Eagles had officially broken up and went with solo careers.  Don Henley had the most successful solo career, releasing hit songs like "Dirty Laundry", "Boys of Summer", "Not Enough Love in the World", "All She Wants to Do is Dance", and "Sunset Grill".  Glenn Frey didn't too bad either, releasing the hit songs "The Heat is On", "The One You Love", "Sexy Girl", "You Belong to the City", and "Smuggler's Blues".

By 1994, the Eagles were back together with a new live release (Hell Freezes Over), and successful comeback tour.  Although they have had their difficulties, including being sued by former member Don Felder, the Eagle's continue to produce and tour.  At the time of this writing, the Eagles Discography was as follows: