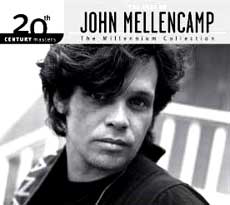 John Cougar Mellencamp 1980 Vtg Promo Poster Nothing Matters and What if It Did?
$39.95