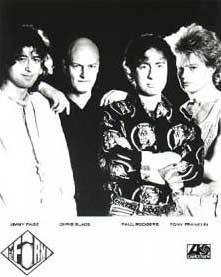 The Firm was an 80’s super group formed by Paul Rodgers (Bad Company), Jimmy Page (Led Zepplin), Chris Slade (Uriah Heep), and Tony Franklin.  Members of the band considered the entire thing to be a two-album contract, and in doing so, they made a point to try and only play original material.

The Firm released their first album in 1985 (self-titled), and it made it to 17 on the US album charts and 15 in the UK.  This album featured the song “Radioactive”, which charted at no. 28 in the USA and was by far their most popular song.  “Satisfaction Guaranteed” was another song from this album that did fairly well.  The Firm’s second release, Mean Business (1986), had one song that charted at no. 61 (“All the King’s Horses”).  The Firm Discography is as follows: