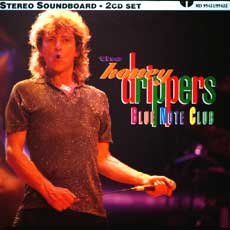 The Honeydrippers was a super-group project.  In 1981, Robert Plant (the lead singer from Led Zeppelin) formed The Honeydrippers to satisfy his desire to play R&B based rock and roll.  Other famous rockers that were part of the band included Led Zeppelin guitarist Jimmy Page and Jeff Beck.  They performed live for the first time at Keele University in 1981.

In 1984, The Honeydrippers released a single EP: The Honeydrippers Volume 1.  There were two songs from this release that made the charts in 1985:  "Sea of Love", a remake of a Phil Phillips song, and "Rockin' at Midnight", another re-make.  The EP was successful enough to warrant a full fledged album, but it never happened.  Some of you diehards may remember that they performed on SNL in late 1984 with Brian Setzer on guitar and Paul Shaffer on Piano.

The reality is, with the exception of a 2006 charity show by Plant being billed as "The Return of the Honeydrippers", there really was no real return and nothing additional to be released from the band.  The Honeydrippers Discography consisted only of the single album: