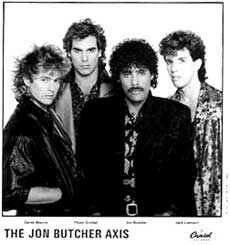 Jon Butcher (born Jon Toombs) was a guitarist from the Boston that met with some success in the 1980’s in his band Jon Butcher Axis.  Jon Butcher was one of a handful of black guitar players, and in his early career, he was often compared to Jimi Hendrix (although Butcher would agree that the similarities mainly stop at appearances).

Butcher started out in the 1970’s with a band called Johanna Wild as guitarist and vocalist.  This was a successful endeavor for him, and it allowed him to create his own band.  After being invited to tour with J. Geils on their Freeze Frame American Tour in 1982, Jon Butcher Axis landed a record deal with PolyGram.  They released their first album in 1983 and then continued producing (sometimes just as Jon Butcher).  Although they toured with bands like Def Leppard and the Scorpions, John Butcher Axis was more of a rock band.

In the 2000’s, Butcher was also involved in a band called Barefoot Servants.  As far as his 80’s work goes, if you are a fan of AOR rock bands like Survivor and the early rock work of Michael Bolton, then you will like Jon Butcher.  The Jon Butcher Axis Discography is as follows: