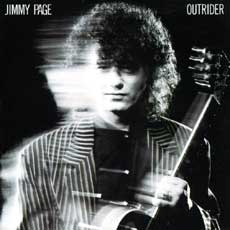 Jimmy Page, best known as a former member of the Yardbirds and as the guitarist/founder of Led Zeppelin, had a solo career in the 1980’s.  In 1980, Led Zeppelin broke up after the band’s drummer, John Bonham died from drinking too much.  Page stayed very busy throughout the 80’s on various projects, many of which were collaborative.  For example, in the early 80’s, Page worked with Robert Plant in a band called the Honeydrippers.  In 1985, Page worked with the band The Firm on an album titled the same.  He also worked with He also created songs for the soundtrack for the movie Deathwish 2.  Fans of Whitesnake’s David Coverdale also know about the Coverdale & Page project of the early 1990’s.

The only studio album that Page released as a solo artist was Outrider (1988).  The album reached #26 on the Billboard 200.  Some of you may remember the songs “Wasting My Time” (peaked at no. 4), “The Only One” (peaked at 12), and “Prison Blues” (peaked at no.26) from this album.  This is a great album with a Led Zepplin feel to it.  In the 2010’s, Page announced that he would be starting a new band, although the specifics of that were not known at the time of this writing.  The Jimmy Page solo Discography is as follows: