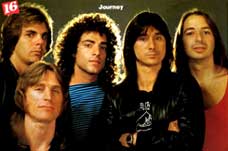 What a great band.  Journey's roots date back to 1973 in San Francisco.  The band had so many hits, we almost have to recommend something like the box set called Time3.  Journey was initially was a mix of rockers from other popular bands of the day (Santana, Frumious Bandersnatch, and The Tubes).  They started out as a back up band for more popular artists and they called themselves The Golden Gate Rhythm Section.  In short order, the name of the band was changed to Journey, and their self-titled debut was released in 1975.  It is worth noting that during their first few albums, Greg Rolie was the vocalist.  Journey's next two releases, Look Into the Future (1976) and Next (1977), found the all the members working on harder on their vocal contributions.

Sales were weak for the band, and Columbia Records asked them to change their sound from a jazz fusion style to a hard rock style typical of the day (think Boston or Reo Speedwagon).  To help with this effort, Journey hired Steve Perry as lead vocalist in 1977, and Infinity was released in 1978.  You may remember the songs "Lights" and "Wheel in the Sky" from this album.  In 1979, Journey released Evolution, which ultimately gave the band it's first Billboard Hot 100 hit song:  "Lovin', Touchin', Squeezin'".  The hit song "Any Way You Want It" was released on 1980's Departure.  It was Journey's 1981 release, Escape, that became the band's best selling release.  Hit songs you might remember from this album that made it into the top 10 include "Who's Cryin' Now", "Don't Stop Believin'", and "Open Arms".  It was during this success that Journey not only found themselves playing to sold out crowds, but also found themselves the subject of the arcade (Bally Midway's Journey and the Atari 2600 game Journey Escape).  How many bands could say they had their own video game in the 1980's?

The band's success didn't stop with Escape.  In 1983, the band released Frontiers, which ultimately brought us several hit songs: "Separate Ways (Worlds Apart)", "Faithfully", "Send Her My Love", and "After the Fall".  It was after the 1984 tour in support of this album that the band decided to take a hiatus.  Both Steve Perry and Neal Schon began working on solo projects.  Never the less, there were two hit songs released during this time for movie soundtracks:  "Ask the Lonely" for the movie Two of a Kind and "Only the Young" for the movie Vision Quest.  In 1986, the band returned to release Raised on Radio.  It was during this time that American Idol's Randy Jackson joined the band on base.  Hit songs from the album you may remember?  "Be Good to Yourself", "I'll Be Alright Without You", "Girl Can't Help It", and "Suzanne".  The band went on a long hiatus in 1987 due to member participation conflicts.

During this time, Neal Schon went on to help form the band Bad English and later the band Hardline.  It wasn't until 1995 that Steve Perry agreed on a reunion, and the album Trial by Fire was released in 1996, which featured the hit songs "When You Love a Woman", "Message of Love", "Can't Tame the Lion", and "If He Should Break Your Heart".  By 1998, Perry was gone from the band, and Journey bounced around with new singers until, at the time of this writing, they had settled on a Filipino singer named Arnel Pineda who looks and sounds a lot like Steve Perry.  The band continued to be active in 2012.  The current Journey Discography is as follows: