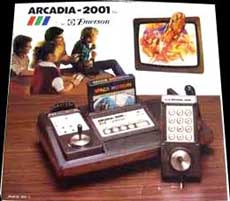 The Arcadia 2001 was an 8-bit home arcade console released by the Emerson Radio Corporation in 1982.  The Arcadia 2001 was unique in that it was a 12-volt power supply, which could be used with the standard cigarette lighter.  The only problem was with the portability of televisions in the early 1980's, which, unlike the Vectrex console system, the Arcadia 2001 required to play.  There were two different cartridge sizes for the Arcadia 2001 (short and long). 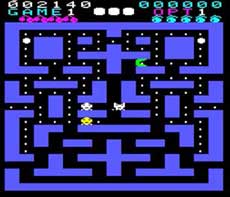 The system was not a huge success, ultimately being discontinued after 18 months and only 47 game titles.  At one point, Emerson had created game versions of Pac-Man, Galaxian, and Defender for the Arcadia, but Atari sued them and they were not able to release all of them.  Instead, for the ones they could not release, they made clones, such as Space Raiders instead of Defender, and Robot Killer instead of Berzerk. Pictured above is one of the more popular Arcadia games - Nibblemen.