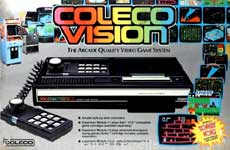 The ColecoVision system was Coleco's second attempt at a home video game console, and it was clearly leaps and bounds ahead of Atari in the quality of its games.  Given the technology of the times, the ColecoVision system had games that were pretty close to their arcade counter-parts.  For example, Donkey Kong came bundled with the system, which helped initially boost sales.  There were a total of 140 games released, many of which could be found at the local arcade (such as Burger Time, Centipede, Defender, Dig Dug, Frogger, Q-Bert, Spy Hunter, and many more). You can see a screen shot of their version of Frogger below, and when compared to the screen shot from the Atari 2600 page, you can see it was graphically better. 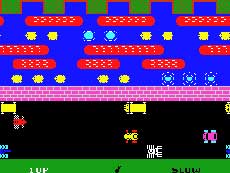 Even though the ColecoVision was more advanced than the Atari 5200, it was not the commercial success that Coleco was hoping for.  By 1984, soon after the video game crash the year before, sales had declined dramatically.  By 1985, Coleco was done.  It is worth noting that Coleco released an expansion pack, called Gemini, in 1982 that was essentially an Atari 2600 clone.  It effectively played all Atari 2600 games, and this made Atari pretty mad.  Atari ended up suing Coleco over the Gemini, and the two parties eventually settled.