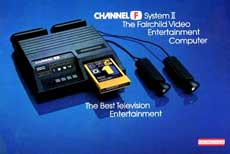 Fairchild Semiconductor released the Fairchild Channel F in 1976 at a staggering price of $169 (it was initially called the Video Entertainment System, or VES).  This gaming console was the first to feature ROM cartridges and to use a microprocessor.  The design was very sophisticated for the mid 1970's, and it was the first console to feature games with a computer opponent (everything else before had required at least two players).

When it was all said and done, there were 27 "Videocarts" (cartridges) released for the Fairchild Channel F, with the final game being released in 1981 (called Alien Invasion and pictured below).  The consoles themselves came packaged with two built-in games, Tennis and Hockey (Pong like games).  The system was recognized as having a good selection of educational-based games, but not much else. 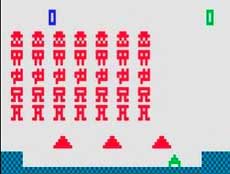 Although the Fairchild Channel F was not considered to be a huge commercial success, many will agree that it forced Atari into moving away from Pong and creating their own cartridge-based console (the Atari 2600).  By 1983, the Fairchild Channel F was all but a distant memory.  It is worth noting that a second generation of the system, called The Channel F System II, was released in 1979.