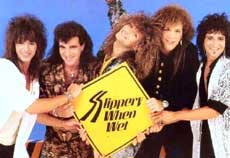 Straight of New Jersey (circa 1983), Bon Jovi was named for their timeless vocalist, John Francis Bongiovi, Jr., who evidently decided that his last name needed a bit of fixin'.  Early iterations of the band had names like Atlantic City Expressway, John Bongiovi and the Wild Ones, and The Rest.  Jon Bon Jovi's first professional recording was on an album called R2-D2 We Wish You a Merry Christmas.  After hitting the pavement, Bon Jovi was able to get local air time for the song "Runaway", a song that was originally recorded by paid studio musicians (not original band members).

Bon Jovi originally hired Jon Sabo to play lead guitar for the band, but he was soon replaced by Sambora.  Sabo went on to create the band Skid Row.  After being signed by Mercury records, the band was going to call themselves Johnny Electric, but were encouraged to name the band Bon Jovi by executives (think Van Halen), a name that fellow band members did not care for much.

In the early days, Bon Jovi went on tour opening for bands like The Scorpions, Ratt, and Kiss, but in Japan and Eurpose, they were a much bigger hit.  By 1985, Bon Jovi was headlining for tours in the UK and Japan.  It was the 1986 album, Slippery When Wet, that put them over the top in the USA.  They started out the year as an opening act for 38 Special, but six months later, they were the headliner.

The band members of Bon Jovi have basically remained the same over the years, including guitarist Richie Sambora, Tico Torres, and David Bryan.  From their self-titled album in 1984 ("Runaway"), to New Jersey in 1988 ("I'll Be There for You; Bad Medicine"), Bon Jovi has survived based on sheer talent, continuing to produce great albums such as Keep the Faith (1992),Bounce (2002) and Have a Nice Day (2005).  Bon Jovi is still one of our favorite 80's hair bands.

At the time of this writing, Bon Jovi was still active on the music scene, making appearances on TV shows, etc.  The Bon Jovi Discography to date is as follows: