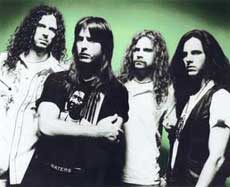 Cry of Love was a gem of a metal band from Raleigh, North Carolina that formed in 1989.  It was a few years before they landed a record deal.  Finally, by 1993, they had released their first album (Brother), which featured the number 1 hit song “Peace Pipe”.  After an arduous 17 months on the road, vocalist Kelly Holland had reached his limit and he quit the band.  The band regrouped and hired former Lynch Mob vocalist Robert Mason, and a second album was released in 1997 (Diamonds & Debris).  The band split up shortly thereafter.  Holland died in 2014.

We are big fans of Jake E. Lee’s band Bandlands, and when we first heard Cry of Love’s debut album, we couldn’t help but make comparisons.  Cry of Love was not an average rock band and we can only wonder how much better they would have done had they landed a record contract in 1989.  We own both albums and continue to be impressed every time we spin them.  We wish there was more.

The Cry of Love Discography is as follows: