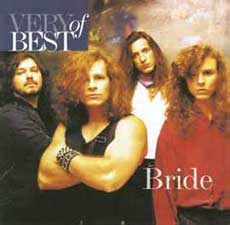 Bride was a Christian metal band in Kentucky in the early 1980’s by brothers Dale and Troy Thompson.  They started out as a band called Matrix with their first demos being created in 1983.  In 1986, the band managed to strike a deal to open for the Canadian Christian metal group Daniel Band at a Pennsylvania concert.  An agent from Refuge Records took note of their talents and signed them to the Pure Metal Records label.  They changed their name to Bride and released their first album, Show No Mercy, in 1988.

Bride released a couple of more albums in the 1980’s, and then continued right on well into the 1990’s and beyond.  Like many Christian metal bands that consider their work a ministry, Bride changed their style to fit the times as the years have gone by.  They have won four Dove Awards over the years in the Hard Music category.  Some of you may remember their songs “Everybody Knows My Name” and “Same Ol’ Sinner”.  At the time of this writing, their most recent studio album was Incorruptible, released in 2013.  This album was a return to their metal roots and a fitting end to their career.  It was announced at that time that the members of the group was retiring.

The Bride Discography is as follows: