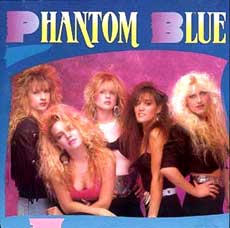 Phanton Blue was an all-female metal band that formed in Los Angeles in 1987.  After a short three months together, the band was signed by Shrapnel Records.  Guitarist Marty Friedman (Cacophony) helped them on their first release, which hit shelves in 1989 (self-titled).  After the band returned from a European tour in support of the album, Don Dokken helped them get a big-label record deal with Geffen.  The band’s Geffen release, Built to Perform, was released in 1994.  Geffen dropped the band soon after, and by 2000, they had officially disbanded.

Phantom Blue was a heavier and more guitar technical female band than other all-female bands like Precious Metal.  Given that some male vocalist in the 1980’s sounded like women, some people might have a hard time discerning the fact that Phantom Blue was all-female.  The last known reunion of the band was in 2009 at the Whisky a Go Go.  The concert was a memorial for the band’s long-time guitarist, Michelle Meldrum, who passed away in 2008.  The Phantom Blue Discography is as follows: