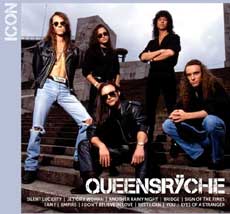 Queensryche was a progressive metal band that formed in 1981 in Bellevue, Washington.  Future members of Queensryche, guitarist Michael Wilton, drummer Scott Rockenfield, guitarist Chris DeGarmo, and Bassist Eddie Jackson, first formed as the band "The Mob".  They hired vocalist Geoff Tate for a few gigs, but Geoff did not want to sing heavy metal, so he was on and off again in the very early days.  In 1981, "The Mob" but together a demo that included the song "Queen of the Reich", which essentially became the name of the band.  The umlaut over the Y in the band name really has no significant meaning, and members of the band often joke about it.  This demo was re-released in 1983 on the EMI label, and peaked at 81 on the charts.  After this success, Tate decided to permanently stay with the band.

In 1984, Queensryche released The Warning, an album that charted at 51 and became very popular in Japan.  Queensryche toured on the Kiss Animalize tour to support this album.  The 1986 album, Rage for Order, found the band trying to fit into the glam metal look and feel that was coming on fast, but it was not a huge commercial success.  However, the 1988 narrative concept album Operation Mindcrime was a huge success.  This success found the band touring with Def Leppard, Guns 'N' Roses, and Metallica.  The band's greatest success was their 1990 release, Empire, which charted at number 7 on the charts.  Many of you will remember the song "Silent Lucidity" from this album, which became the band's first top 10 single.  The result was concerts that featured Queensryche as the headliner.

In the 1990's, Queensryche continued to produce, although there sound became more and more experimental as the years went on.  Founding band member DeGarmo even left the band and became a commercial pilot.  In the early to mid 2000's, Queensryche toured with Dream Theatre and Fates Warning, two more bands known for their progressive metal sound.  In 2004, Operation Mindcrime II was released.  This album charted at 14 and included a cameo by Ronnie James Dio.  At the time of this writing, Queensryche was still active.

At the time of this writing, the Queensryche Discograpy was as follows: