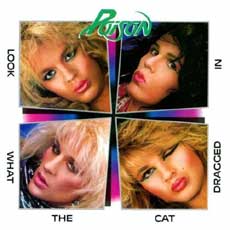 A few of us here at ilovethe80s.com honestly thought this was an all girl band when we first saw them in 1986.  Poison is one of the greatest glam rock bands of all time and they have an interesting history.  The first iteration of Poison formed back in 1983 in Pennsylvania as a band called The Spectres, and then later changed to "Paris".  After moving to L.A., they changed the name of the band to Poison.  The only original member not part of the band in 1983 was C.C. Deville.  Deville was hired after the original guitarist left.  Rumor has it that C.C. was chosen over Slash (Guns 'N' Roses), who also auditioned, due to his high energy.

So by the time they signed with Enigma in 1986, the band was:  Bret Michaels (vocals), Rikki Rockett (drums), Bobby Dall (bass), and CC Deville (guitar).  The boys in Poison were paid $30k for their first release, Look What the Cat Dragged In (1986), which turned out to be the highest grossing album in Enigma's history.  Hit songs from the album included "Look What the Cat Dragged In", "Cry Tough", "Talk Dirty To Me", "I Won't Forget You", and "I Want Action".  Poison found themselves supporting bands like Ratt, Cinderella, and Quiet Riot in support of this initial effort.

Open Up and Say Ahh, released in 1988, was the album that contained their biggest hit to date:  "Every Rose Has It's Thorn".  Other songs on this album you may remember included "Nothin' But a Good Time", "Your Mama Don't Dance", and "Fallen Angel".  By 1989, Poison was no longer an opening act, but a headliner with claim to the seventh best selling hard rock band of all time.  Their 1990 release, Flesh and Blood, was also a hit record, charting at #2.  Songs you may remember form this album include "Unskinny Bop", "Ride the Wind", and "Something to Believe In".

By 1991, after relentless touring, tensions began to grow within the band (as well as drug use).  After a drunken MTV Music Video Awards performance by C.C., things between Michaels and C.C. came to blows (literally).  By 1992, C.C. was fired from the band and guitarist Richie Kozen took over.  After one album, and the discovery that Kozen was romantically involved with Rockett's fiancé, Kozen was soon out.  By 1996, C.C. and Michaels had patched things up, and C.C. was back in the band.

In 1999, Poison went back on tour with huge success and since then, the band has continued releasing new material.  There has also been solo efforts by both C.C. and Bret (country music).  Brett has also showed up on TV from time to time (Celebrity Apprentice, Rock of Love).  At the time of this writing, the Poison Discography was as follows: