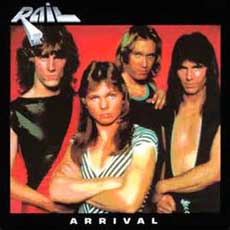 Rail was a Seattle, WA metal band that formed in the early 1970’s as a band called Rail & Company.  The band released a single that was featured on a compilation album called “Seattle Grown”, and before long, they were playing to audiences of 3000 people, which was unheard of for an unsigned band.  After playing as opening act for a number of bands coming through the Seattle area, they were given the opportunity to open for Van Halen on their 1980 Women and Children First tour (47 shows total).

Rail released their first album in 1980 (Arrival).  It was self-produced because they still did not have a record deal.  In 1983, their manager submitted a video of their song “Hello” to an MTV contest, and the result was the band won a record deal with EMI.  The 4-song, self-titled EP that resulted from this contract yielded the two songs the band is most known for:  “1-2-3-4 Rock ‘N’ Roll” and “Fantasy”.  Years later, the songs from this EP, as well as songs from their album RAIL THREE, were combined and released on a single album called Adio.  In the 1990’s, the band came back together to release some new material, and they were known to still be active well into the 2010’s.  The Rail Discography is as follows: