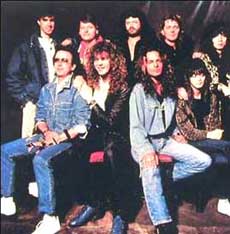 Phenomena was formed by brothers Tom and Mel Galley in 1984.  The band has been described more as a project than an actual band, especially given the fact that there was never a tour (back then, that is) and many guest musicians participated on the albums over the years (such as Glenn Hughes, Scott Gorham, Ray Gillen, and Brian May).  The albums featured concept themes that would generally last the entire album, and vocal duties were not devoted to a single person.

Over the years, new guest musicians helped in the creation of new material, the latest at the time of this writing being in 2013.  In 2014, Phenomena actually made a live performance at the Sweden Rock Festival, which included Tom Galley, Glenn Hughes, John Norum (Europe), and Neil Murray (Whitesnake).  There newer stuff is also good given the talent pool they use to create the music.  The Phenomena Discography is as follows: