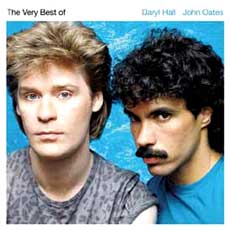 Hall and Oates, aka Daryl Hall (Hohl) and John Oates, made a huge contribution to the music of the 1970's and 1980's.  The duo met in the late 1960's as members of rival bands, and within a few years, they were sharing apartments together.  The rumor has it that one mailbox for one of the apartment was labeled "Hall & Oates", thus the future name of the band.

The duo signed with Atlantic Records in the early 1970's, and their first release, Whole Oats, hit shelves in 1972.  It wasn't until the release of Daryl Hall & John Oates in 1976 that the duo began finding success.  Many of you will remember the hit song "Sara Smile" from this release.  Other hit songs from the 70's on subsequent albums you might remember include "Rich Girl", "She's Gone", "It's a Laugh", and "Wait for Me".

After a musical revamping, of sorts, and a move from Los Angeles to New York City, Hall and Oates released Voices (1980).  This album featured a number of hits, including "You Make My Dreams", "Kiss on My List", and the cover of "You've Lost That Lovin' Feelin'".   The boys were on a roll when Private Eyes was released in 1981.  This song featured four hits:  the title track, "I Can't Go for That (No Can Do)", "Did It in a Minute", and "Your Imagination".  H2O (1982) became their most successful album to date, spawning three top 10 singles:  "Maneater", "One on One", and "Family Man".  There were two hit singles released on the greatest hits album called Rock 'n' Soul: Part 1 (1983), "Say It Isn't So" and "Adult Education".  Big Bam Boom (1984) featured the hit songs "Out of Touch", "Method of Modern Love", and "Some Things Are Better Left Unsaid".  Ooh Yeah! (1988) featured the hit song "Everything Your Heart Desires" in addition to "Missed Opportunity".

Hall and Oates have continued producing and performing since their heyday of the 80's, but have never been able to recapture that initial success (several of their songs have charted on the US Adult Contemporary charts).  The Hall & Oates Discography is as follows: